It was graduation day at the Seattle Aquarium when I first heard of animal enrichment. I had been training for about two months before starting weekly shifts as an interpreter at the invertebrate tanks. My class was composed of about 60 other biologists, naturalists, teachers, and divers. As a treat – both for us and for the animals – after completing our training, we were taken to the sea otter tank. We watched from behind the glass as one of the Aquarium workers brought up a tall ladder – the same ladder which would later become my best friend in Aquarium activities. The Aquarium keeper also brought it a big iced bucket. Holding on to it, bucket and ladder, the she climbed up to a point where she was above the tank, dangling over the water. The three sea otters reconvened at the sight, and starting rolling around in the water as they waited for their precious bucket. This was an enrichment session.

“Enrichment” is a way a Zoo can save their animals from cabin fever. It is the equivalent of Internet or Facebook for a freelancer stuck in his studio apartment during a snow storm. It is distraction, curiosity, and novelty. It offers animals a chance to explore and behave like they would in the wild: forage for food, or hunt for prey (more on this later).

The sea otters got a bucket containing a plastic toy, which had been filled with water and frozen. Toy popsicle, or toysicle (they also get fishsicles and shrimpsicles). The entire frozen contraption is then tossed to the animals so they can play and exercise their mental abilities – or simply to find out what is inside. It reminded me of those dog toys with a treat inside – the dog has to chew, tinker, roll, and play with it, until the treat is released. Torture? We torture ourselves working through puzzles or, you know, curing cancer. 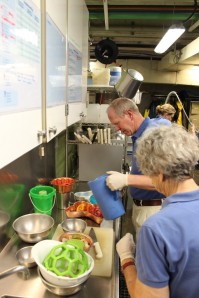 Turns out the “frozen bucket of something” is a common practice in Zoos and Aquariums. This “popsicle” can be made of frozen fruits for monkeys or pandas, or seafood for otters. For feline carnivores like lions, Sarah Putnan of the Smithosnina Zoo has designed the quail-pop or quailsicle: a quail is placed inside a bucket with its legs sticking out, filled with water, and frozen. 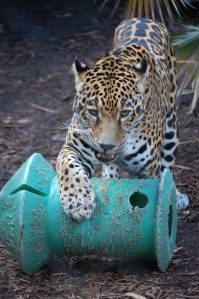 Jaguar unlocks the secrets to the meat hidden inside the blue container. Photo credit: Houston Zoo.

But frozen buckets are not the only enrichment option. The giant octopus I used to feed (atop the giant ladder mentioned above) at the Seattle Aquarium enjoyed playing with an empty peanut butter jar (Youtube is full of examples). Unscrewing the lid is sudoku for molluscs. At the National Zoo, apes play with towels, pandas interact with burlap sacks, lions shred cardboard boxes (really) and chew on horsetails (the National Zoo has a facebook photo set with some animals and their popsicles and towels). Animals can also “attack” too: small felines will hunt for small goldfish the keepers place in their ponds . Sounds like a busy life. 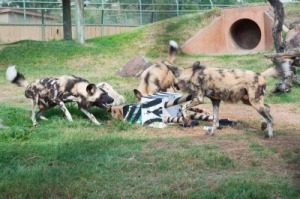 But what my colleagues and I got that day at the aquarium was also “human”enrichment – the chance to meet the animals and get to learn about their personalities. Back then they were just “the otters”. Only later I would start distinguishing them – one male and two females – and calling each one by their names (the Alaskan Aadas, Lootas, and Aniak, which was recently joined by pup Sekiu). Even river and sea otters looked alike before I started interpreting. Now I don’t understand how I could have been so blind: they are worlds apart, like a human and a chimp.

Mirror mirror on the wall: who is the most self-aware of all?

What happens when you place a mirror inside a dolphin tank? Diane Reiss performed that experiment with bottlenose dolphins, and described the results in the book The Dolphin in the Mirror.

The mirror self recognition (MSR) test has been designed to identify self-awareness in animals. When looking at the mirror, can the animal interpret the image as a reflexion of another animal (as opposed to some meaningless image)? Can it associate that animal with himself? Identify himself as an entity? The mirror test is a simplified way to answer those questions, and was originally created by Gordon Gallup in the 70’s. Chimps were the first to pass the mirror test, followed by the remaining great apes (orangutans, gorillas), bonobos and gibbons. Here’s a baby chimp during the mirror test:

Are primates the only animals with self-awareness?

Dolphins have large brains, complex social structures, and ability to express empathy. Could self awareness be added to that list?  A dolphins starts to seem like the perfect candidate for the mirror test.

Marten and Pasarkos initially applied the mirror test in bottlenose dolphins, followed by Reiss and Marino, who published their work in a PNAS paper. In both cases, mirrors were placed inside the dolphin’s tanks. Marten and Pasarkos mentioned the dolphins quickly respond to the mirror, and described their reaction as: “when a dolphin looks in a mirror it often opens its mouth and moves its head around in some rhythmic fashion”. For the authors, it seems clear that the dolphin is  looking at himself, instead of randomly swimming around. Diane Reiss went a step further and replaced the tank mirror with a much smaller one, in the hopes to quantify time spent by the dolphin in that small section of the tank. The book publisher released some of Reiss’ videos os dolphins in the mirror, so you can see for yourself:

To make sure the dolphins were looking at themselves, Reiss performed the mark test: she applied visible marks and invisible sham-marks (with zinc oxyde or harmless markers) in the dolphin’s body, as shown in the picture below.

After marking, the dolphins would immediately inspect themselves in the mirror, positioning their body so they could see the mark. Primates would also touch and scratch the mark, but this proves difficult when an animal has no hands. Reiss and co-workers saw the dolphins rubbing their head at the tank walls after marking, presumably trying to remove the mark they just saw in the mirror.

Perhaps the dolphin is not the perfect candidate after all. How do we  translate the mirror and spot test for dolphins, who have no hands and live in an aquatic environment? Perhaps the mirror test is not a perfect test. How do we adapt the test? Dolphins spend less time in front of the mirror than primates, and Martin and Pasarkos attribute it to the fact that dolphins are more “mobile” and less likely to stand still in front of an object. They are also highly social, so their interest in the mirror decreased with the increasing presence of other dolphins. Those are signs of emerging challenges when analyzing a marine mammal with a test that was designed for a primate. (Orcas were also studied, with similar results).

Enters an animal that, even without hands, has a structure adapted for touching and inspection of a mark: an elephant’s trunk.

Diane Reiss went on to collaborate with an elephant self-awareness study. Elephants then passed the mirror test on 2006 (See mirror placement scheme in the image above), and the findings were published  by Plotnik et al (PNAS 2006). Elephants also have big brains and display complex social behavior, and exhibited analogous mirror inspecting behavior when marked:

Curiously, a non-mammal has also passed the mirror test: a magpie (a bird from the crow family). Magpie on the mirror was published by Prior et al in 2008, and the pictures below show a yellow spot marked on the bird, and its inspection behavior:

The mirror test, however, is not universal. It is argued that this test is not an absolute measurement of self-awareness. An animal might not know what the mirror is, or not be interested in investigating spots (people suffering from Prosopagnosia – inability to recognize faces – also do not recognize themselves in the mirror). I still think it is a somewhat straightforward way to gain insight into many animal species. I wonder who is going to pass the test next!