Megalodon – the Dinosaur of Sharks 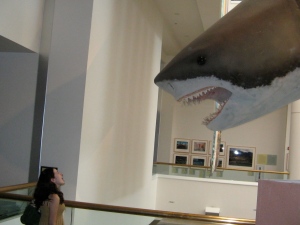 (Cris and Megalodon at the San Diego Natural History Museum - 2006)

Sharks do not have a bony skeleton. The only trace of shark that survives a fossil to tell its story, is the shark’s teeth.

A shark’s skeleton is made of cartilage, the same material that forms our nose and ears. All of that soft material disintegrates with time, leaving not much to be fossilized. The only bone in a shark’s body is its teeth. Fossilized teeth have been found and constitute evidence of sharks existence for as far as 400 million years ago.

One type of tooth, as large as the palm of your hand, is a fossil of Carcharodon megalodon, sometimes dubbed the white shark of the pre-historic oceans. Because there is no other trace of Megalodon’s body, many museums assemble a model jaw, based on the size of the tooth. 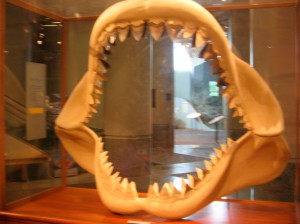 For scale, you can see how it measures up near the Smithsonian guide on the Highlight tour last week. 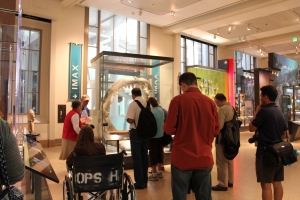 Considering the jaw size, the entire animal should measure up to one of our modern whales, perhaps 50 feet long and weighing 50 tons (the equivalent of ten elephants stacked, imagine that). Models have been created in several museums, including the one I photographed at the San Diego Natural History Museum a while ago. 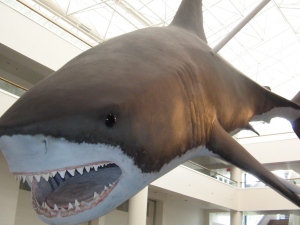 My favorite prop, while volunteering at the Seattle Aquarium, was a replica of a Megalodon tooth. I used it to bait (no pun intended) the children, who in turn would be fascinated by these enormous sea creatures. The kids named it “the dinosaur shark”, even though the Megalodon is much younger than dinosaurs: they swam our oceans 20 million years ago. Luckily to our surfers, they are extinct.. but they teeth persist to enthrall children and adults alike. 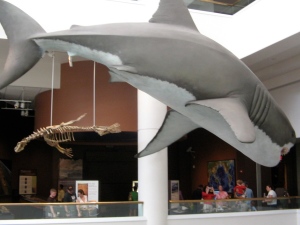